The Return of the Kite continued (part 3)

Eeek! What creature of Morgoth are you?

Wicked Witch of the West actually. Flying monkey. My name is Buford. Brandon sent me with a message

Brandon? What is the message?

The Kite has been found.

But Saruman is after it. And Telcontar...Strider...Chief of the Dunedain...Aragorn...whatever the heck his name is. Well, he's in the slammer in Gap.

In the slammer? And my precious, sparkly, purple-tailed kite is in danger?

What's a Baggins to do?

YO!!! Frodo...Dude!! Doesn't this guy owe you from The Brown Jacket Fiasco??? Dude, and he does a wicked ringwraith as well.....

"Dear Dr. Spitfire. I don't know what to do. I have a friend who loves the outdoors and camping and hiking and such, and he's good at it too. But now he's kind of thinking of himself as a king or something. He's calling himself the King of Gondor. I lost my kite, or I think one of he elves from Rivendell took it. Then my friend found it and is now in jail somewhere south of here. And now there's a wizard after my kite, which I haven't even SEEN in over a month!. Then to top that, There's a funny guy in Los Angeles with NO hair making odd sounds and telling everybody he's me. What am I to do? Signed, Frodo Baggins, Hobbiton, the Shire

Nobody knows my sorrow...

Excuse me, your Highness. *snicker* It's the Royal Delousing time...

That little dude SO owes me.

i need your help. I've got this kite, you see, and pippin lost it and then arwen got it and wouldn't give it back so aragorn let it go but now there's an elf, a wizard,an evil dark lord and loads of other people after it and i've got aragorn in jail while all i want is my kite back. You'll help a poor hobbit without a kite, won't you?

no make that Two conditions....hehe

Sheesh...man, I've had it up to ruggedly masculine ears with this Harlequin baloney...that's it...

What is it now...I told you we were out of Ben and Jerry's Chunky Monkey...dude get over it. 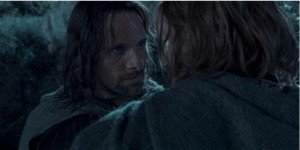 dont give me any malarkey Man! Besides your creepin me out with your bad karma...what'd you do to get killed by orcs and then get spit back as a jail warden????!

never mind, get my lawyer on the phone!

already told you, that takeout pizza counted as your phone call...but would the King of Shwing listen...

besides, you don't have to be mean about it...*sniffle*

Listen Man, youve got to help me, I'm going crazy in here!