"Is that a new ring tone on the palantir?"

"Were you calling, Lord of Mordor?"

"Who else would be calling on this thing? About darn time you picked up. Have you seen my Barney CD? I lent it to you two weeks ago, and I am still waiting to get it back."

*thinks to self* "Dagnabbit!"
*to Sauron* "Um, haven't finished burning it. I definitely will get it back to you soon."

"While we're speaking of CDs, what's the deal with the halfling's collection? Any progress?"

"Well, get a move on! Sheesh, it was so much easier to get things done when Morgoth was still around. Well, I need to go. The Orc Equal Employment Opportunity Commission is here. Apparently, they are getting complaints that the Nazgul are getting preferential treatment. *sigh* Hello? They are the Nine? THE Nine? Sheesh! Talk to ya later!"

that's it...that Big Eye has gotten too big for his Lid... 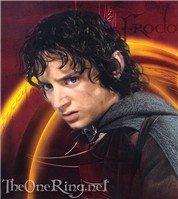 Forget the victory through humility crapola, i'm gonna hunt some Lord!!!!!!!!"
(by annabelle)
Continued on page 9