Frodo: hey guys, remember when the council put us in Elrond's freezer?

Merry: Yeah! Those elves got some huge freezers!! Wasn't much food left in it afterwards then, was it Pippin?
Pippin: mmmwwn wshnnnwhh

Merry: Hey Frodo, you still have tose pictures from our weekend at Rivendell, don't you?
Frodo: Well, as a matter of fact I do, what a coincidence, I have them here, in my pocket.
Pippin: Ah, those where some nice days!

Pippin: Oh, look, that picture of Gandalf dancing! I knew he loved our performance!
Frodo: Yeah, did you know that Gandalf used to be a hippie in his younger days? Apparently, he and Radagast used to live in a collective with some wood realm elves..

Merry and Pippin: No way, you're kidding, right? Gandalf, a hippie?
Frodo: True, they used to have demonstrations all the time, tied themselves up to trees and stuff. Didn't you notice how friendly Treebeard was when you met Gandalf again in Fangorn? It's because Gandalf and his activist friends rescued Fangorn forest from destruction.
Merry: That's wonderful, always save a tree in need.
Pippin: true true 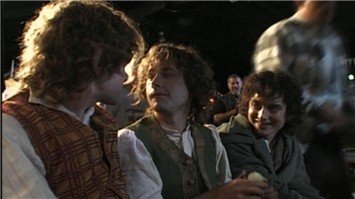 Pippin: Err, guys, I think we'd better move on, Boromir coming this way..
Merry: I can't believe he still is pis*** off about that song
Frodo: Yupp, it's only a song, and it wasn't the whole song either, just the lyrics
Merry: He's clearly overreacting

Is that those hobbits I see over there? I guess I should go tell them I'm not angry with them anymore. What a good idea this reunion party was, a nice chance to clear things up with everybody..

Frodo: Wow, look at him run! He's really scared of Boromir!
Merry: Well, you know, we should be too, he's coming our way really fast! RUN!
*runs*

Jeez, I never knew hobbits could run that fast, I wonder what freaked them out. Oh well, I'll catch up with them later. Now, I wonder where Aragorn is, I'd better make friends with him as well.

*standing behind a column* Crap, Boromir! I was hoping he'd be busy somewhere else, he seems quite threatening with that broken sword over there, I think I'll sneak away, silently, he'll never know I was here.. *backs away*

*loud bang*
Aragorn: AAAUCH! that hurt!
Frodo: You fool! you're drawn his attraction now!
Aragorn: But I bumped my head!

Hey Boromir, have you seen Aragorn around? He was supposed to meet me here.

Uhm, no lady Arwen, I don't know where he is, actually I was looking for him myself.

Hmmm... I wonder where he could be... maybe he's gone to have some tea with Elrond, you know, the wedding isn't going to be cheap, think of all the guests, and my dress, it will be lovely with embroided pearls and jewels and ...

Man, I don't want to hear all about her dress, what do I care, I'm a man! It's bad enough for my reputation already that they know about my diary.. *sneaks away*