On Viggo's musical co-production with Elijah, billy, dominic, henry, buckethead and travis, "Pandemoniumfromamerica", there's a song called "Half Fling". It is... different. And so are the lyrics.
In honour to that, ahem, masterpiece, two members of "Elijah's Grey Panthers" have come up with the following Caption Story. I hope you enjoy it.

After a long day of counciling and arguing what to do with the ring, it was time for some of the guests to entertain the rest of the council.
This evening, it was Pippin, Merry, Frodo and Aragorn turn to entertain. The last of the hobbits, Sam, wasn’t allowed to join their funky jazzorchestra beacause he got a singingvoice like a mule... .

*thinking to himself* stupid guys, wouldn't let me sing with them.... like they got sooo much prettier voices..

*prepares to stand up, clearing his voice, looks around nervously*
Yeah, we’re going to sing a song we wrote called “half fling”

*nort* What are they up to now?

Oh no, this is my future son-in-law?

Interesting, I've heard this before.. 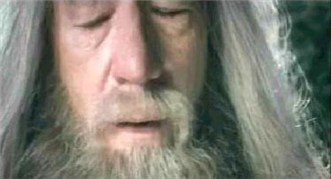 Yeah, this is groovy, reminds me of my younger days *getting into the groove*

Oh my, I never should have left the poor boy alone with those wackos..

*thinking* Man, I know it! They stole my lyrics!! Crap, I knew I should have copyrighted them

Not true! we made the lyrics!

Yeah, Pippin’s right, we’ve been practicing all the way from Bree

If they are using Boromirs lyrics without his permission, there should be no brownies for them later!

Gandalf: Why do you have to be such a partypooper? I was really getting into their performance!
Boromir: Yeah, I know, it’s catchy, but it’s MY funky lyrics! not theirs!

crap... Ok, I confess, we sneaked into Boromirs room last night and found the lyrics there, we were running out of ideas!

You must promise to never peek in other people's diaries again, young hobbits, and don't claim other people lyrics as your own.

And that goes for you too, Aragorn, son of Arathorn!

well He may have made up the lyrics but we made the tune, you can at least hear what it sounds like all put together

Do we really have to listen to this madness?

Well they didn't have to put us in the freezer