The Nazgul of Nee or The Fellowship of the Python

Introduction: With all these various "Monty Python does Lord of the Rings" Scripts floating around on the 'net, it was only a question of time until a caption story would be done.
This is the story of the Fellowship of the Python - you'll enjoy it even better if you know Monty Python's "Hoy Grail" and other Python stuff.

Who are you? - Hallowe'ens not until tomorrow... 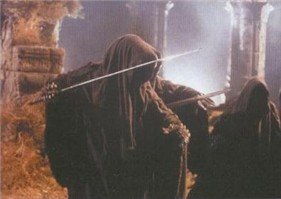 We are the Nazgul who say "Nee!" 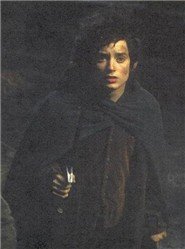 Merry - Who are they?

We are the keepers of the Sacred Woods: Ni, Peng and Neee-Wom!

Keeper of the woods? I thought that was the job of the Ents...?

Enough! Who needs Ents when they've got Nazguls of Nee! The Nazgul of Nee demand a sacrifice!

A shrubbery... hey, isn't that the wrong movie?

You must return here with a shrubbery or else you will never pass through this wood alive!

One that looks nice... and isn't too expensive..

Boy, PJ sure knows how to do a creepy scene...

Merry - So what are we going to do now?

Find a shrubbery, of course.

Merry - Wait a minute there... you really want to go and look for a shrubbery?

Didn't you listen to what the Head Nazgul of Ni said? We won't get through that forest alive if we don't...

...and we really need to cross it, there is no other way to Mordor...

I just want a Starbucks...

Who wants Starbucks... I want some hay...

Pippin - This looks real enough! I am sure they've got some wonderful food, and maybe beer in pints!

...or Lobster Thermidor a Crevette with a mornay sauce served in a Southfarthing manner with shallots and aubergines garnished with mushroom pate, brandy [ed.-probably an Old Winyards brandy] and with a fried egg on top and spam.

Have you got anything without spam?

Well, there's spam, egg, sausage and spam. That's not got much spam in it.

Why can't he have egg, bacon, spam and sausage?

That's got spam in it.

It hasn't got as much spam in it as spam, egg, sausage and spam has it? 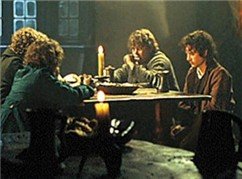 Frodo - I guess we will take the egg, bacon, spam and sausage, then. Without the spam.

Sam - That fellow over there looks awfully scruffy, don't you think?

Did you hear that? He's a shrubber!

The man at the bar told us you sold shrubberies? Is that true?

Yes. Shrubberies are my trade. I am a shrubber. My name is Agaron the Shrubber. I arrange, design, and sell shrubberies.