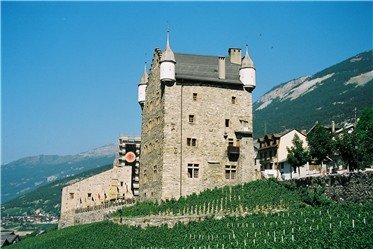 It was organized privately by a group of Tolkien fans; about 400 "Tolkienites" and "Ringers" flocked to the castles of Leuk to celebrate the "Lord of the Rings" and the world of Middle Earth in general. It was the most peaceful and joyful event I've ever attended; it felt more like a Hippie Meeting than anything else. Everyone was in costume, and it was quite common to eat breakfast next to some guy who had just dumped his sword or axe onto the empty space of the bench next to you. 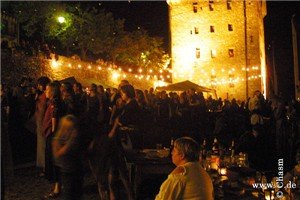 During the four days that we stayed in Leuk we didn't get much sleep. There were workshops (archery, swordfighting, medieval dancing etc.) as well as a costume competition and every evening there was an open air concert.

Here are some pictures go give an impression of what the atmosphere was like. I hope you enjoy.

The Open Air Concerts were by the groups [Schandmaul] , [Saltatio Mortis] and [An Lŕr Celtic Music Band] (all links should have music to download).

We had beautiful, dry and warm summer evenings, starry nights, a wonderful feeling of peace and happiness and great music. 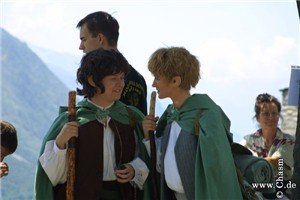 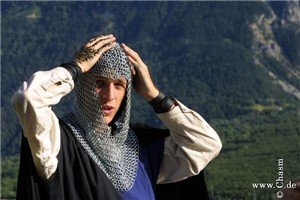 There were several workshops and games; the following pictures show our swordfighting instruction team. It was VERY hot, in the full sun, and the poor guys wore their leather costumes all the time. Rather them than me, lol!

Needless to say, we didn't look quite that professional... and we didn't have real swords, just wooden planks - but they were quite effective, too.

Then there was the Archery Workshop. That was fun - it was a great experience, and I actually hit the target! YAY! Go me! Hehe...

Leuk was perfect as a place to have the Middle Earth Festival. It has two castles and in between there's a lovely square covered in grass. As it's a bit higher than the valley you've got the most amazing view across the valley and to the mountains and hills. 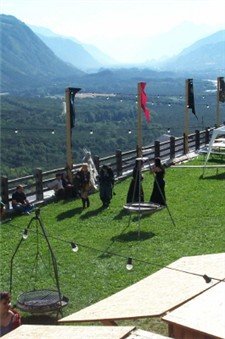 I enjoyed it thoroughly - as you can see:

This year there won't be a festival; the forests around Leuk burnt down to the ground 3 weeks after the festival took place and all the money that had been collected through the festival was given to the community of Leuk. But the [next Middle Earth Festival] will be in 2005, again in Leuk. And guess who's going?