It was a really difficult decision this time, and finally I chose 2 winners. 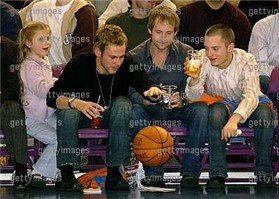 (by Jen) To see the rest of the submitted captions (and I suggest you do, because some are really good indeed) you can go to the [Caption Contest Archive]

Sean - Take me to your leader.
Orli - The destruction of your world will commence in 4 of your earth days.

Merry - I don't think she knows about blonde jokes, Pip.

Galadriel realizes that Gimli has sold her lock of hair on E(lf)-Bay.

Yet hope remains, while the company is true; but if I take the ring, it'll ruin my 'do!

In a final attempt stop the marriage, Elrond calls on his alter ego. "Arwen, humans are a virus."

Arwen, honey...The draperies have to go, its bad feng shui. 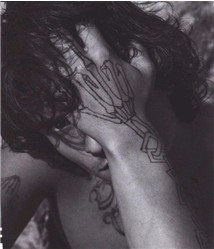 Orli couldn't believe the hobbits would draw on him during his nap! 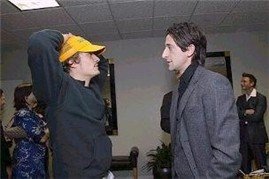 *ahem* Orlando Bloom, i hereby arrest you on behalf of the grey panthers for such offences as the yellow trucker hat and frilly shirts.you have the right to remain silent and anything you say could be used against you.Put your hands on your head and we can discuss any issues at the station....

Explanation: Orlando's style of clothes didn't always go down too well with the GPs