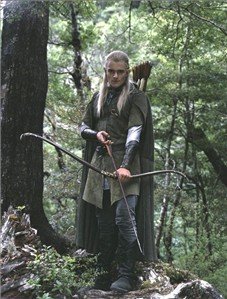 (Captions are from Tolkien Online )

Orlando, thinking to himself: I know PJ wants this production top secret, but having me patrol the set in full costume? Ridiculous!
(by olorin_5)

Was that a blonde joke Peter
(by aragornadrian)

Hair by Loreal, Body by Bowflex
(by FritoBugger)

Just keep smiling, just keep looking cool. Maybe they won't notice that I don't know how to use this thing.
(by Elfstar)

If I remember correctly, I had golden hair in the last frame...WHERE's THAT HAIRDRESSER?
(by lysandra)

I am hungry. I must nourish myself with some lembas bread.

*rumble rumble* Where is my lembas bread?

My lembas bread is missing! I must call upon the authorities to find it.

Hold it right there! Okay, everyone up against the wall.
We need to search each of you for the missing lembas bread.

You will regret this Legolas.

Oh right! Just because I tried to take the ring doesn't mean I took your crummy lembas bread.

Don't look at me.

I didn't take your lembas bread.

Do not search me. I am the one from whom this foul thievery has taken place!

I think we know who ate the lembas bread.

I would never take somthin' that was not rightfully mine.

What? Still no lembas bread? We must seek out the vile lembas thief!

Heh! Heh! I bet they all think that Pippin ate the lembas bread.