Captions from Tolkien Online , with kind permission by ElvenArcher 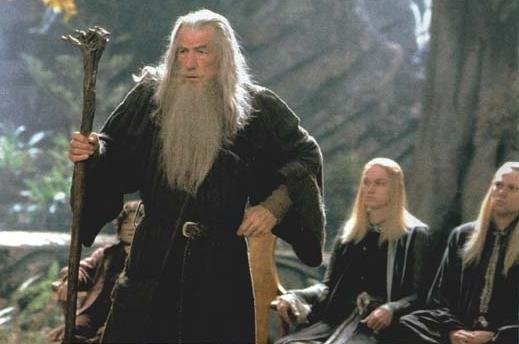 "Hansen may be your favorite rock group, Elrond, but some of your subjects would like a different hairstyle." (by naurghash)

Glorfindel wonders if Gandalf is aware of the big bald spot on the back of his head.(by Elmtree)

Now is the winter of our discontent made glorious sum... Oh, bugger! Sorry, Peter (by Drogulus)

"All right, who's got my hat" says Gandalf standing up, oblivious to the fact that Glorfindel wrote "Kick me" on his back as revenge for never making it into the movies. (by ElfStar) 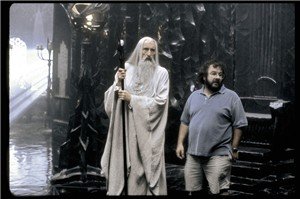 "But it just doesn't make any SENSE, Peter. I mean, if the Balrog had wings, why would it fall into the chasm? Why wouldn't it fly out?" (by Delving)

PJ: I don't know Chris, but if we don't find Lurtz soon, I'm tempted to throw some black goo on Ian Holm and just get this day over with. (by olorin_8)

"Okay you guys, who super-glued Christopher's hands to his staf?" (by Clapsucker)

Aghast, both opponents in the Wizard's Duel observe the effects on Gandalf of Saruman's last spell: "Remove CGI". (by naurghash)

This photograph, taken with a hidden camera, has sparked renewed criticism of the practice of halfling profling. Captain Faramir had no comment, but a spokesman said that Gondor must remain vigilant, and any halfling standing forth should expect close scrutiny until his lordship is satisfied that doom is no longer near at hand. (by Delving)

Okay, kids, it's time to come home. Your parents must be worried sick about you! (by rogue elf)

Help! somebody tell me what scene this is in the book! (by lysandra)

"...You have the right to an Istari. If you cannot afford an Istari..." (by laserprop)

Honest ocifer, I'm not as think as you drunk I am!! (by trasmerg38)

Soldier: hey, get that other hobbit off the field, I'm going to see how far I can toss this one now! (by pippinsqueak)

Elijah: would somebody PLEASE yell "cut" already!? I don't like the way this guy's touching me! (by Selket)

"No, for the last time, we are NOT there yet!!!" (by Elindië Tinuviel)

TIME FOR SOME HEAD AND SHOULDERS! THIS DANDRUFF IS RIDICULOUS! (by sonofsauron)

Hmm, so the light does go off when you close the freezer door... (by Cursed_Nazgul)

When I eat a York Peppermint Patty... I feel as if I'm in a blizzard on top of a mountain! (by Catherine) 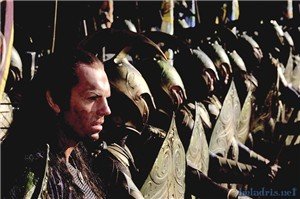 Ok, stand still, straighten up... why is Peter Jackson waving at me and pointing on the dressing room?! (by Black_Guard_109)

Did you ever have one of those dreams where you suddenly realize you aren't wearing a helmet? (by YavannasGrandDad)

Now, now. Relax, everyone! Arwen does NOT appear at Helm's Deep! (by Elmtree)

Thanks for the trampoline, Gandalf. This is the best birthday present ever! (by zaphod)

Here, take my money. Oh, you want my ring? Sorry - you're too late (by keithfras)

"Yes, yes, I know ladies and gentlemen; if the 111 candles on my cake DO catch fire and spread, the exits are on your left and right (politely indicates with hands)." (by Tolkien Zealot)

Ahh, so what if you're playing Frodo now, Elijah. I got to be both Frodo AND Bilbo! Whada say to that!?! or Eleventy-one, and I'm still the best dancer in the Shire! Whoohoo! or "Hey! Look at me! I can juggle!" "Great Bilbo... Now try it with something in your hands." (by dragonfire 42) 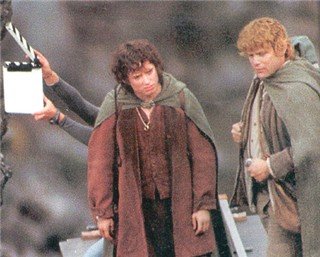 Frodo (wearily) "Which way is that @&*%$ blue screen again?" (by Faramiriscool)

If he claps that board one more time, I'm going to use it on his neck. (by Calma)

Frodo: Uh, PJ? You do know thats there supposed to be 'writing' on a clapper board. Thats the whole point really... (by noledge)

Another take? Aw, come on. Haven't I fallen into the swamp enough for one day? (by Rosie-the-Hobbit)

Elijah notices PJ's been taking a little too much freedom with the movie when he remembers that the ring never grew arms out of his back in the script. (by StriderC)

"OK, I know it's awkward, but one of us has to tell PJ: Elves just don't belong at Helm's Deep." (by Delving)

Arwen, having lived her life among Elves, did not realize that Elvish epics were far too long for mere mortals to listen to undistracted. (by Alouzon)

Arwen is crushed when she is diagnosed with Serial Yakking Disease. Pouring out her soul's pain to the hobbits, hoping for understanding, she unwittingly puts them in the coma from which few awake. (by Princess of Numenor)

To paraphrase "Bored of the Rings." (by tomday)

Merry: I am never going to get the gum off the bottom of my feet! Who'd have thought Elves were such Doublemint fiends? (by innocentevil)

Merry: "Ooo I've found a nit on my fur. Anyone got a comb?" (by faramiriscool)