How many wizards does it take to change a lightbulb? (by Audibly Blonde)

Cobweds up here too? I'll fix that (by alderei)

Thirteen days and twenty-two hours as 'Master of the Manor', four thousand six hundred and fifty-four smelly orc slaves, seven hundred and sixty-six men and women under thrall of my voice, a king, his realm and vassles, and all the lands the eye can see.
For WHAT?!?
You'ld think that at least ONCE, I could get SOMEONE ELSE to light the stupid candles around here, when night falls! (by Sullring)

Look, its a simple choice - either I make it into the second film, or I swallow this now... (by frealak)

'If found, return to Sauron, Lord of the Rings. Barad-dur, Mordor.' Now then, where can I find a mailbox... (by dragonfire 42)

Let's see if I can make out this archaic script. "Made in Hong Kong". (by Plengolod)

"...and I remember putting the Club on my steering wheel and locking it...and locking the car door.....and then I went into the pub...and had a few drinks...and there was an elf. At least I think she was an elf. She certainly had elf ears. And she was speaking Elvish...although it might have been Gaelic. Or quite possibly Norwegian. And as I was going to leave...she said, "Noersk vinkt hagar lithgor neeska!" At least I think that's what she said...and that's the last thing I remember...and now I can't find my keys...and my car's been clamped...and..and...an odd little boy with spectacles and an owl and a broomstick's just asked me if I know which platform the Hogwarts Express is leaving from...." (by wkent)

Well the condition is good, but inscriptions always detract value. I'll give you 50 bucks, or you can trade for 12 CDs (by Zaphod)

"Ok...lemme me see...it says: WARNING! This product may cause SEVERE damage to mental health. May also cause hair loss,skin decay,outbursts of anger and frenzy,hallucinations of royal dead guys that look like the ghost of christmas past cloned several times,heart attacks, and seeing a strange, very LARGE eye, which you see only one of,and looks like it has SERIOUS irritation from a contact. Other bad things that may occur are orcs chasing you, hooded dudes who use a new form of transportation every WEEK, because Gorbag didn't call the car rental place, and this crazy 1970's style wizard who says he is of many colors (yeah right), kidnapping you and keeping you in his castle,playing "Staying Alive " till you go mad and give him the ring. We believe this to be all, but with evil rings made by dudes who hate all living things,have an ego the size Arda, and a history of mental illness to boot...you just can't know what will happen!
Have a nice day,and enjoy that malicious little cockroach of a ring while you can!
Signed: Staff at Mordor
> Contact Info:
For Information mail: [email protected] (by PippinSkywalker)

To snatch or not to snatch, that is the question... (by mushroom410)

"Um, Frodo? I think Bilbo played you for the fool. This ring's made of gold-foil-covered chocolate!" (by Aerin)

Frodo...? I just teared off your toilet's flushing mechanism... (by heuer) 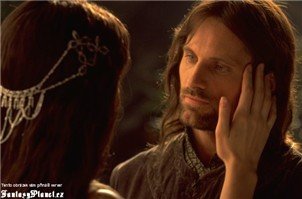 Aragorn gazed into her starlit eyes, and she smiled bashfully and said, "You're going to shave this before we get married, right?" (by singlewhitestar)

Oh for Elbereth's sake, Aragorn, how many times should I remind you to moisturize everyday and exfoliate twice a week!? Your skin looks so dry! Look at me, I'm turning 6018 years but I still look like a debutante. (by darkchild)

This is the last known photograph (bearded man just to the left of large spiked helmet). Anyone who might know where this photo was taken or Bob's whereabout please contact loving wife Shirley Thornton - Mirkwood Forest. (by Jamenta)

At the Mordor Fashionweek , Sauron's new designerhelmet were recieved with much less enthusiasm than he thought. (by Ingve)

Let's see now,...Elendil party of 5,000? Right this way. Welcome to Hades! My name is Dennis and I'll be your server this evening. (by Larin)

*sniff sniff*.... Does someone smell something burning?
Uhh.... excuse me Mister Sauron s-sir.... but your s-shoes are on fire! (by theneonfish)

All right... someone told me that this was a costume party, and I want to know who! (by AredhelTinuviel)

Having been in the middle of eating a muffin and reading his newspaper, "The Daily Orc", Sauron was not in a pleasant mood when he was called outside. (by Dora) 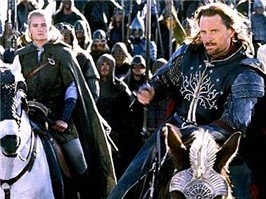 "For the last time, Legolas, are your elf-eyes absolutely sure that Sauron has weapons of mass destruction?" (by sophist)

He killed his brother, tortured our soldiers, and total evilness seems to run in the family. What more proof do you need? Of course he's already attacked us: what do you think those orc-terrorist-attacks were? Hey, why are you looking at me that way, Legolas? I'm just a camara man. (by nenya_telrunya)

Aragorn: A brilliant plan!
Legolas: What is it?
Aragorn: Thats what we need, a brillaint plan! (by noledge)

Not yet used to handling his new sword, Aragorn unwittingly cuts his saddle's stirrup off. (by agamemnon)

Aragorn: "Trust me to pick the horse with one leg shorter than the other three" (by noledge)

Legolas quits singing "I feel pretty" as he sees the King cringe. (by naurgash)

Aragorn: Okay, I've got my armour, my horse, me sword..*he begins sliding off* and once again i've forgotten to tighten the strap on my horse... (by carebear)

*At the Black Gates of Mordor,Aragorn searches for his Black Speech translator while Legolas, Gimli, and the army wait impatiently behind him* Aragorn: i'm hurrying...i'm trying to find out how to say "Come out with all your claws up and your Eye closed! We've got you surrounded! And if you have any pipe weed, please slide it under the Gate.." (by carebear)

"Its not that easy keeping a secret from your best friends! We could read it all over your face!" (by Tom Fool of a Took)

I can't believe that they wouldn't let me join the Backstreet boys. (by no1uno)

"Aah, the UPS is finally here with my new typewriter!" (by KeeperofDoriath)

You won't believe the sandwhiches they serve here, Frodo. Mine must have been this long... (by ElfStar)

Oh, the pizza delivery boy is here! (by Fundin) 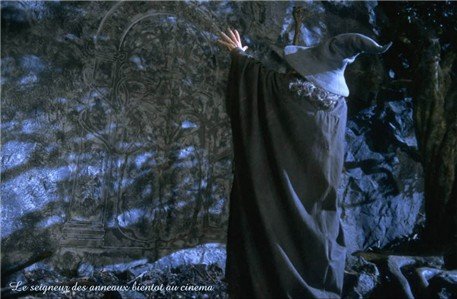 "Of course, of course! Absurdly simple, like most riddles when you see the answer.... PUSH, not pull!!" (by articusmaximus)

Curses, I left my keys in my other robe...(by VeiledAiel)

Gandalf: AW! This is REALLY when I feel my athritis!!! (by PippinSkywalker)

Look! It's been a couple thousand years since I took "Spells of Opening and Shutting 101," and I only got a B-minus in it then, so just get off my back for a minute and let me think, OK? (by Delvin)