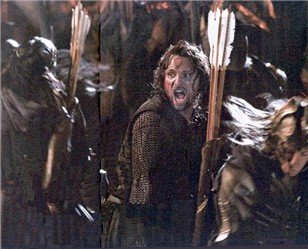 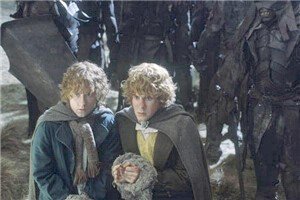 Pippin and Merry receive instructions on how to roll a ball of knitting yarn
(by FrodoBaggins, Elijah's Grey Panthers) 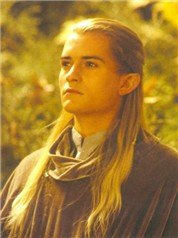 *adopts a richard attenborough voice*A week i had been stalking through the countryside in middle earth, searching for a rare Elf, when i came across a very beautiful female Elf... which was actually a male Elf, but thats beside the point . I decided to get my camera out and attempt the capture it.

But unluckily for me, the creature spied me and dashed into a huge thorn bush... i was more intelligent than that, so i devised a master plan to get him out.

I danced around the bush shouting "FREE HEAD TO TOE MASSAGE! MANICURE AND PEDICURE INCLUDED!!!" Instantly the Elf ran out, arms splayed out like the above picture, shouting something like "take me now!" With the Elf catching net, he didn't stand a chance.

The Elf, who's name was Lega.. Leggy... something like that, jumped at the chance of posing for "glamour" photos IE: mugshots so we could prove that we had captured him. Elves: Very pretty, not to clever.

This picture was taken about half and hour later, and he got a little carried away with the 'glamour' shots. He started nancing round the studio and generally annoying everyone, so we stole his precious coat, arrows and quiver. There was no way he would give up the tights though. He then decided to have a famous Elf sulk... Needless to say, we released him back into the wild as quickly as possible.