Please feel free to go there and donate pictures that you like - you'll be amazed what the captioneers come up with!

by Melphie After making Peter Jackson swear that the movie he was acting in would be realistic compared to several things that happened in previous movies he had acted in...one fatal day while filming Osgiliath...trust was fractured.
"Peter...the walls...they're plastic..." by Raimah Frodo was taking a hypnosis course - just in case the whole 'taking dark and powerful ring back to mountain of boiling lava and avoiding evil Lord who wants to rule the world' thing didn't work out and he needed another job to fall back on. by evilmouse222

by Melphie Oh, the joys of lawn-care in the summer!
Eomer: You...stupid....HOSE, YOU!!! *kicks it* by Erisan Eomer: There. NOW you know what people here in ROHAN do to SALESMEN!! by Amersion

Frodo: i thought we couldn't grow mushtaches...
Sam: i was thinking the same thing...

by Arehini Sam: Mr. Frodo, you must have faith! "Harry Potter" could NEVER be as good as "Lord of the Rings"... by arwentheelf02

Sometimes, being able to hear the trees talking to each other wasn't an advantage. "Right! Who called me 'Blondie'??"

by hobbiteyes Legolas: Hold on Aragorn, I've gotta find the spotlight... by Prince Taldar Stage 4 of hair conditioner withdrawal: seeing your favourite brand floating in front of your eyes... by oh2bagrapefruit Tree: I'm gonna rip your head off and tie it to a bush so that you entrails are---
Aragorn: What do the trees say Legolas?
Legolas: er, erm, they say these are blessed days indeed when (threats continue) the King of men and Prince of Mirkwood are among them (tree tells Legolas to flip off) and that they are greatful to us. by Eryka 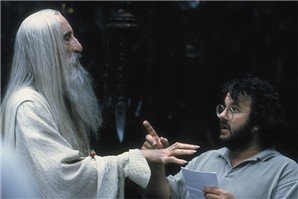 by Reasonably Crazy This is the last photo we have of Peter Jackson before he was scratched to death. We think he might have been trying to explain why Saruman was cut out of ROTK. by hobbiteyes "STAY! SHAKE! Wow, those Istari Obedience Classes were worth every penny." by hobbiteyes

He is the king of Gondor, a ranger from the north, he has surivived Helms Deep, Moria, and Amon Hen and yet Aragorn can't win a drinking contest.

by Shadowfax Hangovers really do come too quickly for some people. "I feel good...I feel great...I feel horrible..." by Melody Today, Aragorn learned exactly why it is unwise to look into your mug of beer before imbibing it. by Celadrian Gamling: "Hey dude, I wouldn't drink if I were you - the tankard's stuck to my nose..." by hobbiteyes

Some people can never just simply say "excuse me". Luckily for Aragorn this was just a ghost.

by Shadowfax When they got the photos back, Aragorn realized the film had been double exposed - and the camera hadn't been used in a long time... by Hobbiteyes Family reunions really can be a pain for some people.
Aragorn: Uh...Grandpa! How...um...nice of you to join us! by Melphie What a pity that the battle of Pelennor fields had to fall on Halloween day... by Percilla the Pink

"Now... which one of you was it who put the red sock in with all my whites?"

by Hobbiteyes Gandalf: If I've told you once, I've told you a THOUSAND times, you do NOT sing "The Ants Go Marching" in the middle of Hama's battle drill!! by Mevie Orlando Bloom (Legolas): I said that I don't WANT to cross my arms because it covers up my rock hard abs! by Vrosay88 Gandalf: All right, I demand an answer. WHICH one of you called me "Friar Tuck"?! by Melody

After months of travelling and lack of food, Frodo began to visulise Gollum as a walking po-ta-toe.

by Shadowfax Sean: *thinking* If there was a thought bubble above his head right now...a brownie would most definately be inside... by Myelftoo 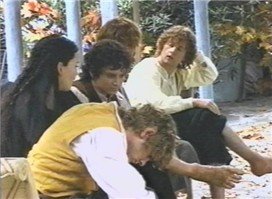 Arwen: So why is it, that you lot are 3 ft tall, and I'm somewhere around 6 ft, and yet when we sit down, we're all around the same height? Hobbits: ....*general pondering*

by Lenne len len And this, ladies and gentlemen, is our RC showroom. the models shown are the Sam RC (currently trying to teach Pippin RC his alphabet), the Pippin RC (failing to learn his alphabet), the Merry RC (not switched on), the Frodo RC (conversing with the Arwen RC) and the Arwen RC (having interlectual conversation with the Frodo RC). As you can see, we have strived to make our RC units as close to their living counterparts as possible, in appearance and personality.
if you would kindly look over here..... by oh2bagrapefruit