Please feel free to go there and donate pictures that you like - you'll be amazed what the captioneers come up with!

#split second previously#
PJ (off screen) : Er, guys, I hate to break to you, but, er, one of you has, er, Lij's wearing the wrong shirt, we're going to need to film this AGAIN.

by SupaLorLor Don't you just hate it when that teacher points that ONE math question at you...? by Percilla the Pink Frodo always felt that he stood out slightly at the Red-Head Hobbit Club. by Hobbiteyes Unfortunately, Frodo was the only person who could translate the elves words to his hobbit friends, but he was still deciding whether to translate 'I fart in your general direction you hairy footed, lembas stealing, overeating little infindles' or not. by Legolasland Peter Jackson: My CD's...they're gone...GONE!! Noo!!
Billy/Dom/Sean: *turn heads*
Elijah: ...what? by Mevie

Airline Express, 2005.
To make a long story short, we keep this from happening.

by Myelftoo After the joyous occasion of the stove blowing up, Sam realized that you are actually supposed to poke holes in the taters when you're cooking them... by Melphie What would've happened if Merry and Pippin had indeed lit off another firework... by Terorr

by Prince Taldar Having told his parents he was going to be 'studying hard' all evening, Frodo was horrified to see his dad turning up for the annual Pumpkin Fair at the Green Dragon. by Hobbiteyes

Frodo never liked it when grandma came over.

by Hobbiteyes Frodo groans as a blast of 500 year old fish breath smacks him in the face by Aerya F: "Extreme facial make-over? You mean you're gonna do it to me, or did you already DO it do HIM?!"
by Myelftoo Smeagol was overwhelmed when he found out his best friend Shelob was at home after all, but Frodo simply wasn't amused. by evilmouse222 One text message to rule the scene.
"Gona b u". by Melody

by Mevie Deciding that war was not the answer, Aragorn decided to plant hedges around all of Gondor instead. Unfortunately, orc fertilizer was the only brand available. by whitemaid Aragorn: Resistance is...what? by Melodie Aragorn discovers that Boromir wasn't exaggerating about the air quality of Mordor. by Hobbiteyes The victorious army returns to Minas Tirith only to discover that dinner was to include broccoli. by MoreLunacy MoS: You cannot possibly hope to contest the Dark Lord. People go MAD in his presence!
Aragorn: Yes, I can see that... by Terorr

by Hobbiteyes elrond: what...is the capital of assyria? by sunshine Even foresight becomes a little difficult to use when your vision is going due to old age... by Percilla the Pink Elrond: Legolas, I'm planning on dying my hair blond, which number do you use; honeymist blond 223 or moonlight blond 137? by madtook28 Elrond: Are you Aragorn, or are you a brilliant computer program that has manifested an allusion that only looks like Aragorn? by Faerlan

When the hobbits stopped to build snowmen for the fourth time, Gandalf lost all patience.

by Hobbiteyes The Giant Snowball cometh.
Leaving Gandalf right in its path. by Mevie Gandalf clearly regretted telling the hobbits that his clothes were "dry clean" only... by Erisan Legolas: Ooh look an avalanche!
Gandalf: Stop quoting the obvious, Legolas, and moooovvvvve!!!!!!!! by BubblyElfGirl *reading a sign*
"It says, 'Danger of Avalanches, do not make loud noises."
"What?"
"IT SAYS, DANGER OF-"
*ominous rumbling*
"Oh... damn." by Hobbiteyes

The most common drawback of living to be 6,517 years old. You simply stop looking at the expiration dates on those boxes of crackers...

by Erisan The Ring was to be taken to Mordor by someone approximately three feet tall. He was to be accompanied by a blonde, a man with a phobia of soap, a man with anger management problems, a homicidal dwarf, and three more midgets, at least one of which who had absolutely no idea what was going on.
It was days like this when Elrond really regretted giving up sucking his thumb. by Celadrian E: *thinking* I TOTALLY should've spit this gum out before the council... by Orc2 It's always that one bit of steak that you cannot get out of your teeth... by Tithar The crossing to Valinor became much less magical when they entered a particularly rough patch of sea... by Hobbiteyes I sure wish someone would invent coffee. . . by MoreLunacy 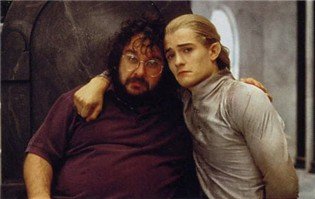 by PhiePhie This, ladies and gentlemen, is the outward appearance of a tender-hearted, sweet-natured elf, obviously saddened by something terrible that has happened to another, but little do we know what he is actually thinking inside...
"Mwahaha...let's see Figwit top this pout!" by Prince Taldar