Aragorn: No it's not!

Boromir: Yes it is! It's been open all day!

Aragorn: Oh no! Now Arwen will think I'm an even bigger slob!

by Erisan Elijah Wood didn't really know what else to do for his audition for the "Soap Opera"... by Percilla the Pink Sam looks at Frodo then remembers Gollum bit him for no reson the other day then it hit him. Gollom was not ring crazy ...he had rabies by Gandalf1992 It all started the day that the Soap Flakes company decided to match the color of their labels with the Potato Chip company... by Melphie

by Shadowfax January 26th someyear Sam was starving. He picked up a piece of Lembas bread and was about to eat it when he noticed something: 'Best before january 1st' by madtook28 Sam: That Gollum creep is the stupidest, nastiest, creepiest, meanest, shove-off-edge bully I have ever known!
Lembas: Tell me about it. by Tithar

Legolas, as the Oliphant fell with a monstrous crash to the ground below it, realized that he had completely lost count of everything he had killed that day...

by Prince Taldar "You watched me take out an Oliphant single-handedly and yet you *still* have the nerve to stand there and make comments about my hair?" by MoreLunacy Legolas: What? You say that arrows don't penetrate Oliphants? *Oliphant roars* Great, thanks. by gondorianlass 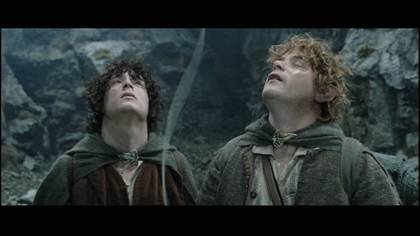 The problem with being only 3 feet tall and standing in front of the flag pole on the 4th of July.
"Ohhh say can you see......?"

by Terrorr Sam realized, after careful guessing and a lot of pain, that Gandalf had indeed left his pipe...lit...on the ground again. by Amersion

"Awww, what's a little water on the football pitch? C'mon!" 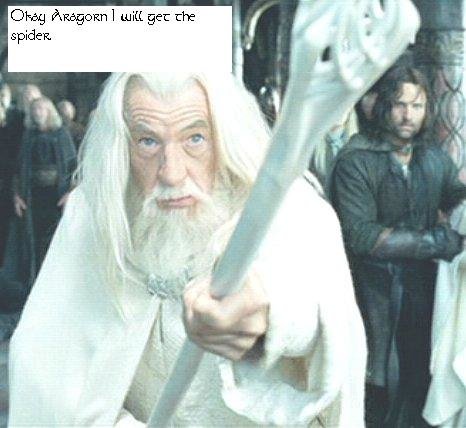 by PhiePhie Gandalf: Don't worry everyone, I'll have the lightbulb fixed in no time... by Melphie

Legolas could get very competitive in skipping races.

by Hobbiteyes Legolas: No!! Really!! I can't hold the Oliphant by this leash!! I can't!!! by Mevie Bicycles in Middle Earth.
It's all in the steering.
No wonder they weren't invented back then. by Tithar After skateboarding down some stairs, swinging up onto a horse, and doing some Tarzan moves on an Oliphant, Legolas figured that he was finally ready for the trapeze.
He was wrong. by Orc2

Pippin: What? What is it Gandalf? Is there NOT supposed to be a little munchkin from Oz in the throne of Denethor?

by gollum on atkins Pippin: I've got a bad feeling about that suicide note on his chair Gandalf... by PhiePhie Nikes.
The extrordinary shoes.
You won't be able to wear robes any longer than that. by Myelftoo

What do you do when the thing on your head is heavier than you are...?

by Myelftoo SAM: Oh look Mr.Frodo! It's the rare American Bald Eagle! FRODO: Sam, it's me... SAM: Oh by evilmouse222