Don't you even think about getting near him!

Now look what you did! You scared the Elf away! And pretty darn fast too, look at him run!

It worked on Snow White. And after all this IS a Fairy tale.

Okay, but what we would need then is a charming princESS!

Dispair no longer, brave ones, I shall save the prince! 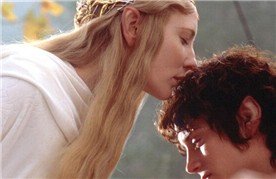 If it pleases Doms Brown Bobcat to continue, this will be continued some time during the next weeks.... .