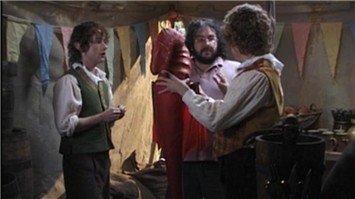 And this is what we're going to fire at the Oscar voters...

by Vicky Ollier PJ: Ok, see where it says, "Do not hold in hands"? Now- Hold it in your hand! by Newmoon Pete: Now! This is your big introduction scene. Try not to look stupid lighting this big rocket inside a tent.
Merry: Can't you introduce us and the rocket outside the tent? by FoolOnTheHill Camera Dude: PJ! your cameo is in bree! get out of the shot!!! by DwarfPrincess PJ: Trust me Dom. It'll be fine.
Dom: No, you don't understand! Billy has this ... problem ... with fireworks. Or anything lethal..
PJ: Why do you think we cast him as Pippin? by Holly Billy wasn't really that concerned when Orlando told him the arrows were talking to him. He had problems of his own with talking objects, and they were a whole lot bigger . . . by Anŕwiel Peter: No. You guys cannot ride this around like a hobby horse. This is Middle Earth, not the Wild West. by Melvasaiel Firework: $20
superglue: $4
matches: $2.50
Dom's face when they light the firework and he realizes his hands are stuck: priceless by good_one_pip Pip: "Does it bite?" by Fool of a Took 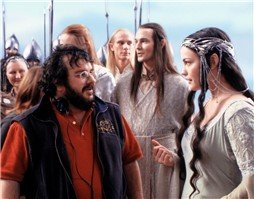 Um, are you here with the hobbits, sir? Because they're in one of the lower circles. This is an invitation only after-coronation party. 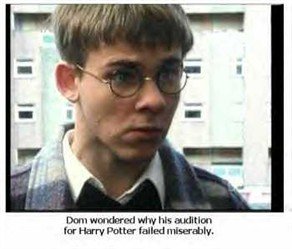 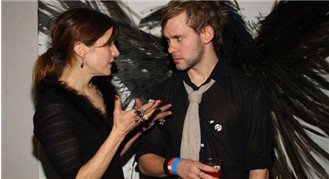 So you're saying that if I drink this red magic potion, the wings will disappear?

Theoden: Is this everyone you could round up, Eomer?

Frodo - What are you doing?
Gandalf - *with an evil smile* - Forwarding it to your future address.

submitted by EllaG and Elf Boy 2000 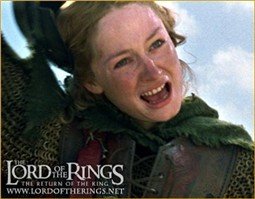 For future references: It hurts when your hair gets caught up in a helmet. 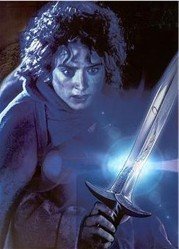 Frodo learns the hard way that the batteries that provided Sting with electricity should under no circumstances come into contact with water. 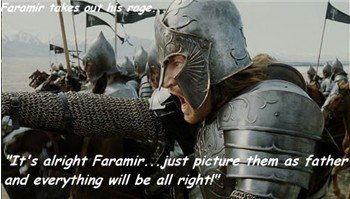 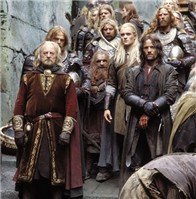 Cameraman: "Okay, smile, everybody! This is for the obituaries!"
Aragorn: "Ours, or yours?"
Guy in back (on left): "That's it-I'm outta here."
Guy in back (on right): "I'm with you on that one."
Legolas: [Thinking] "I hope my hair looks all right."
Central guy in middle row: "Man, that dwarf is short!"
Gimli: "All right, enough with the photography: let's kick some orc!"
Gamling: "Obituaries? Hmmm...maybe bunny ears would be a bad idea...."
Theoden: "I'm smiling!" 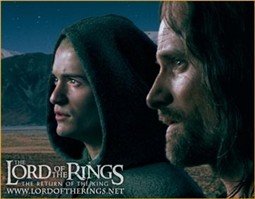 I spy with my little eyes...

Stay away from my chocolate!! 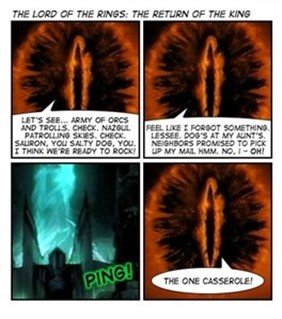 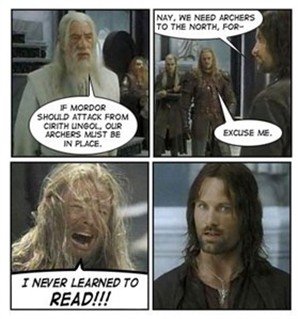 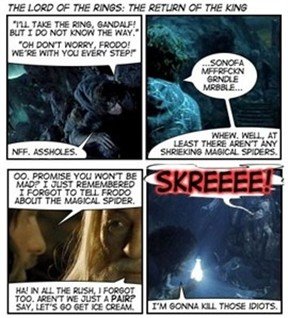 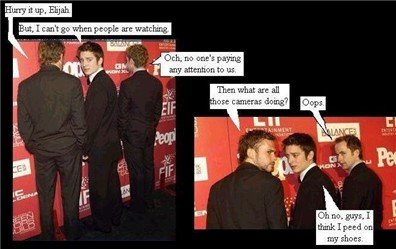 submitted by Thilwen, taken from LotR Spoofs, which sadly has gone offline a while ago

submitted by Julie, in relation to Pirates of the Caribbean

Having Fun with that Caption Picture ŕ la Monty Python...

Billy: So how does this thing work?
Peter: First shalt thou take out the Holy Pin. Then, shalt thou count to three. No more. No less. Three shalt be the number thou shalt count, and the number of the counting shall be three. Four shalt thou not count, nor either count thou two, excepting that thou then proceed to three. Five is right out. Once the number three, being the third number, be reached, then, lobbest thou thy Holy Hand Grenade of Antioch towards thy foe, who, being naughty in My sight, shall snuff it...