by DomKnight Ring thinks to self: Eep! I'm sorry Isildur, come back, for goodness' sake, don't leave me here with these loonies! by anonymous Deagol tries desperately to read the tiny Warning label. "May cause excessive sweating,yellowing of eyes, persistent sore throat,alopecia, craving for raw fish, and has known to cause split personalities." by Daronda Deagol: Darn! I lost my filling...again! by galloping elf Smeagol: "The One Ring? From the filmses themselves? Where did you get it, Deagol my love?"
Deagol: "I won an auction...they calls it Ebay." by Alquawen Deagol: And I shall call him Shiny, and he shall be mine. And he shall be my shiny!
Smeagol: Erm... You ok, buddy? by Newmoon D: You know what?
S: No. What?
D: I think this thing's evil
S: Oh? How can you tell?
D: The way it's locked its jaws onto my palm is a slight giveaway by Ringeater How the gold rush started in Middle Earth... by Johna

All captions can be viewed at the [archive]

Viggo wasn't at all pleased about PJ spotting the chewing gum he had accidentally sat on earlier, as the giggling made him totally screw up his speech...

Boromir and Faramir had a great time when they finally got the hang of the polka!

Pippin: That was lucky! We almost landed in that big pile of Shi...

When the glow of Sting attracted every goblin and orc in Moria to the Fellowship, Frodo began to suspect that Uncle Bilbo had a sinister sense of humor.

Shelob was feeling sick, so she went to Mordor's X-Ray Clinic and here is the plaque... Those filthy little hobbitses are hard to digest, especially when they carry jewelry.

Frodo and Sam find out just how strict airport security in Lothlorien has gotten.

To his horror, Theoden realized that the tips of the rohirrim spears were not as strong as he had originally estimated.

The Rockin' Rohirrim pose after a terrific concert at Helm's Deep, where they took an audience of orcs by storm.

So this is what you see after you get headbutted...

When "Blackadder" meets "Lord of the Rings"

or The Curses of Master Merry

by Elanor & Celebalqua, Elijah's Grey Panthers
Explanation: "Blackadder" is a very popular comedy show on English TV. The following captions are a direct quote from that show.

Why can't we have some meat? What about them, they're fresh?

That was uncalled for!

May you be turned orange in hue and may your head fall off at an awkward moment! 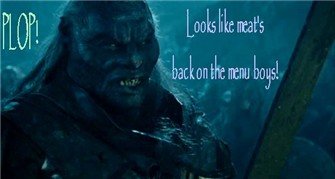 *PLOP* - Looks like meat's back on the menu boys!

What's wrong? His head fell off, didn't it?

Yeah. But he didn't turn orange...