by Lana the Wanderer Frodo: I haven't got over my goldfish and now this! Gollum, you must have more respect to other people's pets! by Tildy After falling into the dead marshes and losing the Ring and seeing it eaten by a fish, Frodo continued hopelessly searching through stomach after stomach of fish.
Frodo- No Sam!! Not in this batch either! by ChildofThranduil Elijah: So you're telling me that fish have taken over the Shire and have invaded our fridge to devour the entire contents of it, and have miraculously been killed by the blinding light in the process?
Gollum: Aha. by RosiePosie Peter Jackson: Yes Elijah, those are this fish that died when you peed in the Wellington fountain! by Heather Just because I have the Ring does not mean I automatically like fish! by MerryMary Frodo decided the Atkins Diet just wasn't for him. by Amariel Frodo finds out what happens to his fish when they die: Frodo: Fluffy? And McBigglesworth? Buddy? ((sob)) MOMMY!!!!!!!!! YOU SAID THAT THEY WENT TO A FARM IN KANSAS!!!!!! by Kirsten of the Panta-Loons So you're saying, if i wanted to tig Sean who had been togged by Dom who'd been tagged by Billy on a tig-tog-tag formation and Sean has tigged three people, togged five wihch is less than seven, and tagged Dom who is the the Tig Record Holder, i have to eat one of THESE babies? by SupaLorLor fish #34: Wow! I can't believe I made it into the Lord of the Rings movies! by Nikki

Please also view all submitted captions at the Caption Contest Archive, which is [here].

Elijah had a rather unfortunate accident while testing his first prototype for the wheel-less bicycle.

by Elanor, Elijah's Grey Panthers or:

Elijah Wood stars in a spin off from the lord of the rings trilogy: When Ents Go Bad!

Sorry to disturb, another call for you, Mr. Greenleaf.

Aragorn: Of course your beard doesn't look fake, i think it is a good colour of white...Has legolas been talking "fashion" to you again?

Gandalf: Yes, I fear he has lost all sense of common decency, he mentioned how greasy your hair looked.

Oh, Legolas! Would you come here for a moment?

What have I done?

I can't believe you cut off all my gorgeous hair...It will take AGES to grow that all back!!! Not to mention that I will have to wear this hood for the rest of the movie...ugh!

Billy (Barett) *thinking to himself*: I don't think I'm ever coming back to this summer camp ever again!

Sauron after a heavy treatment of Visine.

Yess, preciouss, we gots an award! It's ours, it is!

Merry has a sneaking suspicion that Pippin had more than enough brownies.

by Artemis Archeress, Elijah's Grey Panthers (referring to the Special GP brownies with the Secret Ingredient, that has, well, quite strange effects on your brain... )

Another one about Brownies:

Reading the Hitchhikers Guide of Middle Earth:
"It is advisable at all times to signal where you want to go. However, sometimes it is not very clever to be completely honest. Take for example the following picture:

Do you think that someone would be stopping to take our friend Frodo with them? - No, I wouldn't think so either.

Perhaps if the little plaque said this...

... the driver would stop and take our young friend with him. Full of anticipation to eat those brownies he might just forget to ask where young Frodo'd like to go. And that's how you do hitchhiking, my friends.

Elijah and his friends were sitting at a basketball game. While his friends enjoyed the game and were attentively following what was going on, Elijah seemed a bit distracted, staring blankly into nothingness....

After a while Dom noticed something wasn't quite right and asked what was going on.
"Did you see that Blonde next to me?", Elijah whispered. 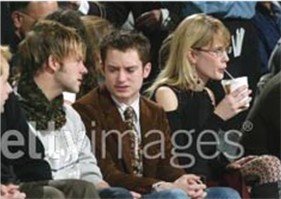 Elijah - Argh, she's making me nervous. Oh no, and now she starts slurping her drink....!
Dom - Come on Dude! You're a lucky man! Talk to her!
But Elijah couldn't be convinced and asked his friend in the black pullover:

Dom: Hey Lij, I will gladly swap seats with you
*mumbles to self: not only is that lady hot, but this guy next to me really smells!!*
Guy: Would you like to run that by me again??
Billy: Hey Lady- do you 'ave some perfume on you? This guy really needs it!