How come I get the small sword?

by anonymous Merry: No really....what is it? by Cory Sword for your hobbit friend $100
A fancy box to keep it in $30
Wrapping paper and a bow $5
Waching him try to figure out what it is - Priceless by HappyHobbit Merry: What?!?! Hobbit insurance doesn't cover sword wounds?!?! by Tahiri Greenleaf Merry: This isn't from Wal-Mart is it? Because I saw where they got Sting. It was in the toy aisle. by Alexandra (Merry reads sword)How to keep an idoit busy turn this sword over....(turns sword over)How to keep an idot busy turn this sword over...(turns sword over)......(thinks about it and reads again)...
*out of view*
Aragorn: You know that's not nice..
Legolas(blue in the face) I can't help it, it's so funny! by AAH What do you mean i can't return it without a receipt? by Em Merry: I have the sword. The look. And I'm hanging with the right people. The ladies will totally dig me.
Random Soldier: nah, you're still a little furry guy. Merry: Don't CRUSH MY DREAMS! by Faerie in Combat Boots And Merry steps back in awe at his work of hedge trimming with only his sword. by stefanie Merry: No, my mother never told me not to run with pointy objects.... by Captain Kirk ...and then Aragorn realised he'd forgot his sword, and I said I'd go back and get it, and I went back but it wasn't there and I thought I was so screwed, but then I saw this other sword and it was stuck in this stone, and it looked kinda like Aragorn's sword so I thought he might not notice, so I pulled it out but everyone keeps calling me King Arthur now... my name is MERRY, guys, MERRY! by enelya Gandalf: What is it Merry?
Merry: We have a slight problem...
Gandalf: What sort of problem...
Merry: Frodo and I kinda re-enacted Weathertop... by PjT


There were about 300 caption entries to choose from - to view all entries, you can go to the Caption Contest Archive [here]

Billy: Look at the ball fly!
Dom: No, no, let me try.
Elijah: Try pressing this button right here, see?

The "many" faces of Orlando Bloom's Legolas

I apologize for the small pictures - my bandwidth is slowly starting to reach its limits...

Journalist: Let us examine the many and varied guises of Legolas, Elven Archer of Mirkwood.

Here is "Scared but Confident"

We found that this look doubled for "Distraught" and "Stupid Dwarf"

After a few too many sips of Miruvor

The "I wish the human would bathe" look

The "personal ad" look - "Hello, I'm legolas and I like long walks through the trees"

And the infamous smirk of the elves!

The "no really, it's good" face

A bit of vertigo?

And seasickness perhaps?
Legolas: Oh Eru, is the shore supposed to be swirling like that?

Playing with one of the cave troll's rubix cubes.

The "Where's the pointy-end?" look

The "Oh no, i forgot my arrows" look

Frodo and Sam practice the "no really, it's good" face.
"Is this how it's supposed to look?"

The "I can do that better" look.

The "Isn't that cute" look.

And the sympathetic look.

And another "where's the pointy thing" look.

And, of course, the "Oh God I left my wallet in Rivendell" expression

The "still the prettiest" look

Frodo: OK guys, can you take the picture soon...cause this wig is really
itching me... any day now...
Aragorn: Let's hunt some orc.
Gandalf: I am wise. Very wise.
Galadriel: Who do you think you are? I'm older AND wiser. So there. (this from her anger at always being stuck in the corner.)
Legolas: Maybe if I look fierce enough, they won't notice I forgot my arrow. (sound familiar?)
Gimli: 43!!!
Boromir: Like, help...
Arwen: (to makeup people) You idiots, the cut is supposed to go on the other cheek!
Pippin: What's that?
Sam: That, my friend, is, er, um...
Merry: ?
Nazgul #9: Look mom! I told you I'd get a good role! No, back here... in the back...
The Fellowship of the Loonies: in theaters December 19.

by Lana the Wanderer

The ballad of brave sir Aragorn
Starring, Legolas as the lead singer... 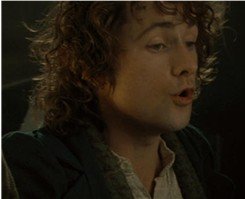 ...and The Hobbits as choire boys:

He was not in the least bit scared to be mashed into a pulp,
Or to have his eyes gouged out and his elbows broken,
To have his kneecaps split and his body burned away
And his limbs all hacked and mangled, brave Sir Aragorn!

Brave Sir Aragorn ran away,
Bravely ran away, away.
When danger reared its ugly head, he bravely turned his tail and fled.
Yes, brave Sir Aragorn turned about
And gallantly, he chickened out. Bravely taking to his feet,
He beat a very brave retreat,
Bravest of the brave, Sir Aragorn.

He is packing it in and packing it up
And sneaking away and buggering up
And chickening out and pissing off home,
Yes, bravely he is throwing in the sponge.