by Kat, taken from LOTR spoofs .

Galadriel - May the Force be with you...

*grumbles* Never sleep in the presence of the hobbits!

Dom - So your watch tells the time in 5 different time zones and you were still late?

by Wistra_Lorven Christmas Angel, from

Billy - Look, Sean, just 'cause you're jealous because the girls want *my* autograph more doesn't mean you can sign over everything I sign.

by The Christmas Chica, from

They won't catch me! I swear I won't become the next Winona!

by Christmas Elf Luver, from 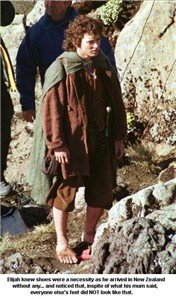 Elijah knew shoes were a necessity as he arrived in NZ without any... and noticed that, inspite of what his mum said, everyone else's feet did NOT look like that.

The first hobbit wig was not quite right as Elijah found out.

by the santa huggling mcr, from

Why won't you die?

by bithartist, taken from LOTR spoofs .

Shoot, these car mirrors! I can't see a blind thing!

by Christmas Elf Luver, from

by Elenai, taken from LOTR spoofs .