It turns out that we have now discovered the inventor of tic-tacs due to a certain hobbit who spent countless weeks with a horsehead on his shoulder.

by mevie
Bill: Horsenap! Horsenap! Someone save me!
Sam: Shut Up. I happen to remember you wanting to get away from that Ferney guy...
Bill whines: Well, I did, he was just, way too unsanitary! Did you know, he hadn't taken a bath in 2 years?!?
Sam: Talk to Aragorn about the record for longest period without taking a bath. I bet he holds it. by janine
Bill- Hey Sam
Sam- Yes Bill
Bill- Have you ever heard of something called a caption contest on the lotr caption page??
Sam- Yes.. what don't tell me you entered one!
Bill- Yes but i have to say i am not very good at them, these hooves are not for typing!!!
Bill's caption- njahddftfwelvbmcxzwertsm by Heidi of the Woodland Realm
Sam: *sigh* Why is it always me? Why? Why do I have to be stuck with this stupid horse?
Bill: You're not stuck! You can jump off the cliff anytime and I'll take over the cooking. by ElberethVarda
Sam: All right, Peter [puff], I get it that I [wheeze] need to drop a few pounds, but [groan] HOW MUCH LONGER DO I HAVE TO LUG THIS PROP AROUND?! by Alquawen Sam: ya, ya, ya. Everyone gets their 2 seconds of fame when they reach the top of this hill because the camera zooms in on them...well how come i have to share my 2 seconds of fame with a horse? by Tahiri Greenleaf My Little Pony now comes with new cloaked hobbit. Distressed expressions may vary. by Rosie Posie

To view all submitted captions, please go to the archive . Thanks.

The Istari Power Drink! For wizards on the move!

The fight for the legendary One Brownie of GP

They're creepy and they're kooky, mysterious and spooky, they're all together ooky, The Rohan Family.

60 watts, my hobbit bum! This thing wouldn't light up a cupboard under the stairs!

Yeah, we're practising for a remake of "Crouching Tiger Hidden Dragon" - as you can see, there's still a lot of work to be done.

With a little help from Jean-Claude

by Artemis Archeress, Elijah's Grey Panthers
Introduction: I would say that this is a caption thread which contains not only one, but two Grey Panthers in-jokes. First off, Grey Panthers had a fun time naming various creatures: the Nazgul, for, instance were named Chuck, Brandon, Bob, Larry, Fred, Frank, Dave etc. On one occasion the Watcher in the Water at the Mines of Moria was named Jean-Claude, being a "very sensitive French (no, not Freedom) Water Monster".
Secondly, the Grey Panthers enjoyed the idea of "RC Elijah" and "RC Billy" etc. No one knows how many RCs are still functioning, though.

All was going well when filiming the Lord of the Rings trilogy until the scene where the ringwraith stabs Frodo... 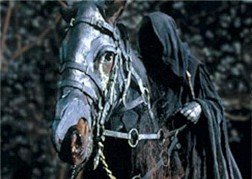 Chuck: Look guys,I'm really sorry. I didn't mean to, I'm serious! Is there anything I can do to help?

Sean:Besides what you've already done?! I don't think so!
Dominic: Wait, Billy's thinking. He could POSSIBLY have an idea...
Billy:YES! I have an idea! ...oh wait...I lost it. Maybe we should ask Jean-Claude.

Ian: JEAN-CLAUDE! Open up, Jean-Claude! Chuck killed Elijah and we need to find a replacement! And no we can't use you.

Jean-Claude: ofrofro loopooy gawafh. (Translation: "Why did you wake me up? I was trying to sleep! But I do have an idea...")

Jean-Claude: afroldeedoo (Translation: "I got this gift from the GPs a while back. I mean besides brownies. I'm sure you can use it.") 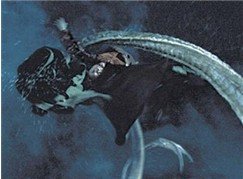 Jean-Claude: tooleedoowooey (Translation: "An RC Elijah. The finest they had. I hope it's still alright. Water and RCs often don't mix.")