They really need to invent taxis...

Peter: "And this is me in spain last year. do you like my trunks?" - (by lorza windle)

PJ: So that's extra cheese with pepperoni-
Billy: No! We want mushrooms!
Sean: Can you get pizza with 'taters on it? - (by Newmoon)

PJ: "Okay then. So basically in this scene, Elijah, you act shocked and dumbfounded. Sean, you act overly protective of "Mr. Frodo". Dom, Billy, you guys act clueless and hungry. Got it?" - (by Ashley)

PJ: look guys, with this shortcut, you can pass to the next level, but don't tell this to Strider... - (by Gabrielle)

PJ- Look how many times do I have to tell you hobbits Middle earth telecom has high rates until 6:oopm. just look at this phone bill. - (by stacey)

Peter: "Okay, everybody crowd in, and pretend for the behind-the-scenes documentary crew that I have something really important written on this paper."
Dom: *snicker* "That's a really nice drawing of a duck, Peter."
Peter: "Ahem. It's a frog."
Dom: "...Like I said." - (by Marlynn)

Peter:(excited) . . .yeah and she said THIS line means I'm going to make an excellent movie that everyone will love! - (by Brynna)

Aragorn: Don't let the fishing rod fool you. - (by izi)

VM- well, AnnaBell, now that the movie's over PJ said I can't keep you because when they sell you on e-bay you'll make millions. But don't fear I WILL get you back. - (by Randi)

Viggo: I wonder if the real Aragorn ever got this bored waiting patiently to kill something... - (by Draca)

Viggo sits and ponders the complexities of the number 9. - (by Diamond)

Some decided to combine the two pictures to submit your captions:

PJ: All right, that's a dollar from Elijah, 50 cents from Billy and Dom, and a five from Sean.
Later . . .
VIGGO: I can't believe we don't even have enough to order out. - (by Explody)

Peter: It's from Orlando ... it says "Have taken helicopter, going home. Job description did not say that shower time is limited, or that would have to run around fields with smelly mortals every day. -Bloom
P.S. Accidentally packed Viggo's lucky sock in my rush. Will return Mr. Happy Feet through post."
Viggo, talking to other sock: Do you know what that stupid elf did? First he calls me a smelly mortal, then he takes Mr. Happy Feet ... don't worry, Mrs. HF, we'll get your husband back ... - (by Brownie-In Motion)

To see all captions, you can go [here] .

The Lord of the Seuss 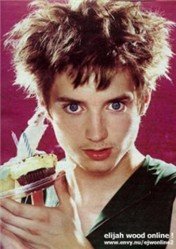 WOULD YOU EAT THEM IN A BOX?

WOULD YOU EAT THEM WITH A FOX?

COULD YOU, WOULD YOU, WITH A GOAT?
(Dom's character in SPIVS is called Goat.)

WOULD YOU, COULD YOU, ON A BOAT?