by ThingsYouShouldKnow, Elijah's Grey Panthers (referring to a review of The Two Towers, which read: Personally the casting of Elijah wood was always a dreadful mistake as Frodo and although he is better here he is still woefully miscast, thankfully he is far less annoying than in the first installment.

Pictures and Captions from Tolkien Humour: "The Botch of the Rings" 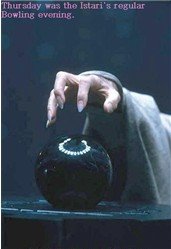 Create a lunch worthy of Mordor!

After a long hard day tormenting the hosts of Gondor, his crown hurt, his boots were killing him... he hoped Mrs Witch-King had run a nice hot bath and got his slippers ready.

Be honest. Do I look good in black?

The Inaugural Rivendell Surfing Challenge was not the success the onlookers had hoped for.

Here's written in the Feänorian characters according to the mode of Beleriand:
Beware of the Balrog

(by Susan; taken from Toasted Hobbits)

(taken from The One Swoon of Middle Earth )